Most good roosterfish captains have a decent supply of surface poppers and a quality spin rod in their arsenal. In fact, a few of the captains I know use nothing else. In addition to the fact poppers are an extremely effective method for catching roosters and jacks; there are several other reasons to have surface poppers among your bag of tricks.

a)   Many people have become dependant on live bait for getting the job done. Well, what happens if last night’s hard rain did not allow the bait fishermen to get out? Or, maybe the full moon has scattered the bait, and live bait is not available. The popper gives you the ability to not miss a day of fishing, plus the confidence it really works.

b)   When non targeted species are in the area, namely needle fish, they will raise havoc with your live bait. In a short time you will not have any bait, and your day will be done. But, with poppers, you can save your live bait for when you want to use it, or when you get out of the area holding the needle fish. When needle fish are in the area, use a 100 pound leader off you main line. It needs to only be about 18" long, and do not worry about the heavy line spooking the game fish. With a surface popper, the leader is out of the water anyway, but a needle fish attacks at the knot connection (head), and will slice through 40 pound mono like butter.

c) Live bait is generally slow trolled behind the boat, but that is not really where the roosters are. When they are in the feed mode, they are in closer to the shoreline, on the backside of the breaking surf. The boat cannot get in there, because of the dangerous waves. But, a popper can reach clear to the foam on the beach, and cover every foot of water where the fish are actively feeding. 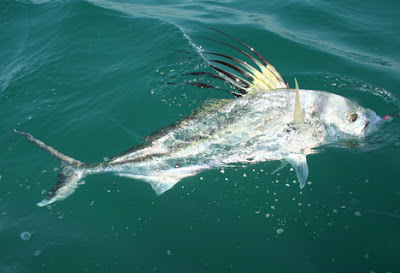 I remember one time when Keith Paul was fishing with Adolfo on the panga Dos Hermanos. Keith told me he was battling his sixth large roosterfish and he was toasted from casting the popper and fighting fish. His arms were like jello. He told Adolfo "OK, this is the last one, and we head back to port. It was only 11:00 AM. There was another spin rod laying against the gunnel of the boat, with a hooked attached to a live bait in the live well. just before Keith had his 35 pound fish boated, Adolfo spotted a free swimmer of over 50 pounds, which had come over to investigate. He flipped the live bait over the side and it was inhaled. Keith's fish was boated, and just before the release he told Adolfo "OK...let's head for home!" Adolfo handed him the spin rod and said " we go after you close the bail and get this one in."

e) Roosters are not the only fish which will strike a popper. In fact, you will probably raise three jack crevalle for each rooster attracted to the popper.

f)  If you take the hooks off a popper, you have a deadly teaser bait for a fly caster to have a shot at the rooster or jack. There is no way a fly caster is going to make a 150 foot cast from a rocking panga. But, a popper will cast that far, and bring the fish all the way back to within a very reasonable casting distance of less than 40 feet from the boat.

A few important items about casting poppers, is you must have quality gear, with the ability to cast very long distances. However, do not go out and buy a 12 to 15 foot surf rod, just because you heard people cast a long ways with them. They are set up to cast heavy weights, and will flat out tire you out after a few casts. An ideal outfit is a 10 foot to 11 foot light to medium duty salt water rod, with a medium sized salt water spin reel. (A conventional reel will cast a long ways, but the spool diameter is generally not big enough, even with a 5:1 gear ratio, to easily attain the retrieve speed you need). A light action salt water spin reel is easier to cast all day, but be sure to compare the amount of retrieve with a medium sized spin reel first. The greater the retrieve distance, for every complete revolution of the handle, is the one you want. You want that popper to sizzle across the water, with a minimum amount of effort. Otherwise, you will not last more than a couple of hours.
There are a few other tricks you can use to get longer casts. Use a 30 or 40 pound braided line. When compared to an equal pound test monofilament line, the new high tech braided lines have a very small diameter. The smaller diameter means less resistance for longer casts, without sacrificing breaking strength. Plus, for those really large fish, you will have more capacity on the reel. If you have not installed a trigger release on your rod, the braided line can shred your fingers. Be sure to wear a casting glove, or at the least, tape up your casting index finger. A bimini twist is the most secure way to form a loop on the braided line, and then use a double loop to loop connection through the swivel eye. Use a drop of magic glue to secure the tag end of the knot. The swivel will then attach to the popper. 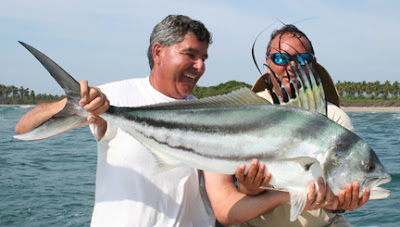 A final trick is to take the popper and drill an angled hole in the bottom, and near the back. The drill bit should penetrate into the hollow cavity. Then insert a small section of lead into the hole, sealing it off with a hot glue gun. The lead which works the best is the pencil lead, usually attached inside surgical tubing and used in fast current bottom bouncing for steel head. This additional weight will increase your cast distance, and not sacrifice any action.

Poppers need not be limited to the 6 to 8 inch surface poppers which are actually designed for the purpose. Some metal spoons and jigs cast a long distance, and splash along on the surface with a fast retrieve. They can also be deadly. However, no matter what style of surface lure you use, make sure it is a heavy duty salt water lure, with heavy duty hooks. There is no way fresh water gear or lures will hold up under the ferocious strike and brutal runs common to the roosters and jacks.
Ed Kunze
Posted by Ed kunze at 7:32 PM No comments:

Ed kunze
Moved to Mexico in 1998 and I am enjoying life edkunze@gmail.com